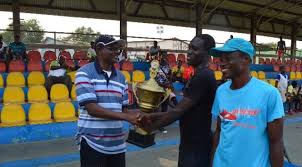 Kwabena Ofosu Bamfo staged a fight back beat his elder brother George Darko to win 2016 1st National Ranking title for the first time.The hug at the net was the conclusion to an evening that marks a new chapter in Kwabena Ofosu Bamfo’s tennis career.

“It’s a really great moment; he’s the toughest player I’ve ever played in my life, the best person I know, and also the defending champion “Ofosu Bamfo said in an interview after the big final.

“It’s going against your best friend, and at the same time going against the greatest competitor for me in men’s tennis in Ghana. So it was really difficult today.”

Although Ofosu Bamfo was the underdog going into the match, he challenged Darko’s dominance very early.

After losing his serve once in the first ten games to drop the first set 4-6, Ofosu Bamfo came roaring back to win the second set 6-4.  And Bamfo eventually closed out the encounter in the third set with 7-6(5) win.

“When I’m playing against him I don’t think of him as my brother because he plays well, he’s hitting so many big serves and running a lot of balls down,”  Ofosu Bamfo added.

“When you’re in the moment you don’t really think about it.”