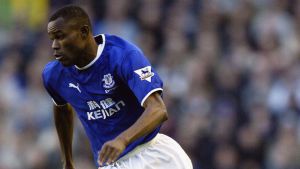 LIVERPOOL - JANUARY 25: Alex Nyarko of Everton makes a break forward during the FA Cup Fourth Round match between Everton and Fulham held on January 25, 2004 at Goodison Park, in Liverpool, England. The match ended in a 1-1 draw. (Photo by Alex Livesey/Getty Images)

Alex costed Everton a whopping £4.5m in 2000, but was a complete flop for four years, spending most of his time on loan back in France.

The former Ghanaian international is now a cult figure as one of the Toffees’ worst ever players due to one hilarious incident.

THIS PICTURE CAN ONLY BE USED WITHIN THE CONTEXT OF AN EDITORIAL FEATURE. NO WEBSITE/INTERNET USE UNLESS SITE IS REGISTERED WITH FOOTBALL ASSOCIATION PREMIER LEAGUE. Everton’s Alex Nyarko (left) has his shirt pulled by a fan who ran onto the pitch at the end of the FA Carling Premiership game against Arsenal at Highbury, London.

During a league game with Arsenal in 2001, a fan ran on the pitch and offered Nyarko his own Everton shirt, signalling how the supporters rated the clueless central midfielder. The Ghanaian, with his emotions shattered, pathetically asked to be substituted and immediately left the club on loan.

The full list of the 25 Worst Midfielders in the History of the Premier League.

Alex Nyarko has been named the Worst Midfielder in the History of the Premier League in a 25-man squad according to a report in UK.