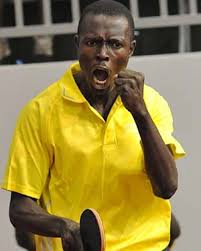 Table tennis top seed, Derek Abrefa, will defend his title during the National Top 8 tournament at the Accra Stadium Tennis Court on Saturday.
Abrefa, who won last year’s competition, would be joined by fellow national greats such as Felix Lartey, Emmanuel Commey, Bernard Joe Sam, Jacob Saikom, Emmanuel Asante, Ernest Mawutor and Ishmael Addy after their qualification from the four invitational justifiers.
The announcement of the date was made  during the launch of this year’s competition at the Accra Stadium.

Also on Saturday, in the women category, Lynda Annor, Hilda Agbovah, Afua Oforiwah, Beatrice Gyasi, Georgina Hackman, Hilda Agbottah, Eva Ampah and Augustina Baidoo will compete for honours.
Addressing the media at the launch, the President of the Ghana Table Tennis Association (GTTA), Mawuko Afadzinu, said the winners of this year’s competition in both the male and female categories would pocket GHS 2,000.
Each of the participants will also receive an undisclosed appearance fee.
Mr Afadzinu appealed to corporate entities to sponsor the sport with the view to making their league more professional and introduce inter-college and SHS competitions into the sport.
The Vice-president of the GTTA, Mr Kenneth Ashigbey, said sponsoring the sport would not only induce the youth to nurture their potential, but would also enable them to earn revenue for their upkeep and that of their families.