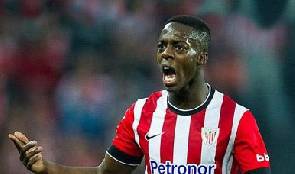 High flying Inaki Williams has extended his stay with Athletic Bilbao by four more years despite the flurry of suitors.
The 21-year-old Spanish-born Ghanaian attacking prodigy spurned the chance to leave the San Mames by signing a new deal with the Basque side that has a £50m buy-out clause.
Liverpool reportedly led the list of suitors gunning for the signature of the budding forward.
The speedy winger missed the opening 12 fixtures for Athletic but still returned to bag an impressive 10 goals for his Liga side.
Head coach of the Liga side Ernesto Valverdo initially ruled out any winter move for his attacking winger and will be pleased to see extending his stay at the newly built San Mame.
The 21-year-old leads the European scoring chart for players under 21 years and has since been nailed down with a buyout clause of £50m. Inaki Williams had one year left in his deal with an estimated £15m buy-out clause before putting pen to paper on his improved deal that runs till the summer of 2021.
Williams has since managed 49 appearances in all competitions for his boyhood side with 13 goals to his name. The Spanish-born Ghanaian is been chased by officials of the GFA on his nationality switch for Ghana.