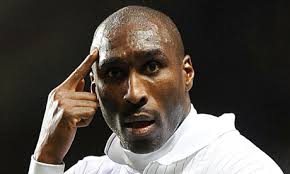 Former English International and Arsenal defender Sol Campbell has revealed that he would love to coach Ghana’s senior national team the Black Stars in future.

The former Tottenham Hotspurs star who was labelled “Judas” by some Hotspurs fans for moving across North London to join their arch-rivals said he is done with his coaching studies and would consider the opportunity to coach any team around the world.Responding to a question by Morning Starr host Nii Arday Clegg on whether he would want to coach the Black Stars, Campbell said “Yes Why not, you never know…I am working towards the job.”

Campbell who was joined by former Middlesbrough captain George Boateng is in the country under the patronage of Primeval Media, who are organising two friendly matches, to preach peace ahead of the November polls.

Campbell’s team, the World XI, which will be made up of players like Edgar Davids, Emile Heskey, Didier Drogba, Samuel Eto’o, Steve Mcmanaman, Patrick Kluivert and others will first play Asante Kotoko before they meet the Black Stars of Ghana in the second match.

Sol Campbell who is now involved in politics urged Ghanaian footballers to use their free time to productive use as they are role models and most youth look up to them. He commended Stephen Appiah for accepting to become a Peace and Unity Ambassador as Ghana prepares for elections in November this year.