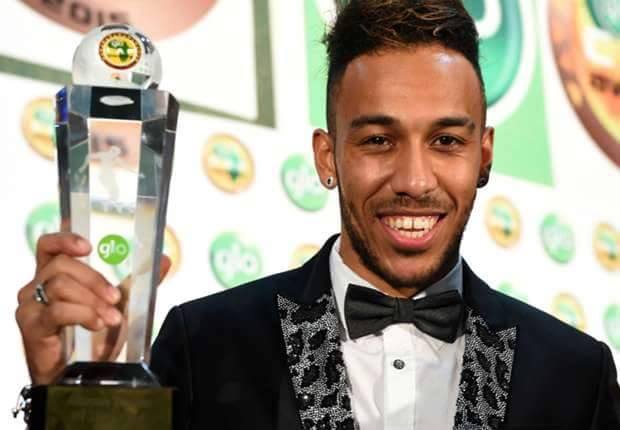 Gabon striker Pierre-Emerick Aubameyang has admitted he was hurt by criticism from Ghana’s Andre Ayew and Ivorian Yaya Toure after he was voted the 2015 African Player of the Year, strongly defending his record for the top gong.
The Gabonese striker says he confronted Ayew over the statements he made after he was handed the award in the Nigerian capital this month.
Aubameyang, the Borussia Dortmund and Gabon striker, was given the award this month in Abuja, leading to complaints from Yaya Touré and André Ayew that he did not deserve it.
But Aubameyang, 26, who has scored 27 goals in 27 games this season, hit back at Touré, the Manchester City and Ivory Coast midfielder, and Ayew, the Swansea and Ghana forward.
“I spoke with Ayew, I did not understand [his attitude]. It doesn’t matter,” he said.
“The Golden Ball [of Africa] is played on all season and my calendar year was not bad. It hurt me and that’s a shame.”
In a vote of coaches and technical directors of Caf nations, Aubameyang got 143 points, with Toure on 136 and Swansea midfielder Ayew on 112.
“The award is based on the whole year and not just the African Cup of Nations,” added Aubameyang, who is currently the leading scorer in the Bundesliga with 18 goals.
Toure, BBC African footballer of the year for 2015, had won the Caf award in each of the previous four years.