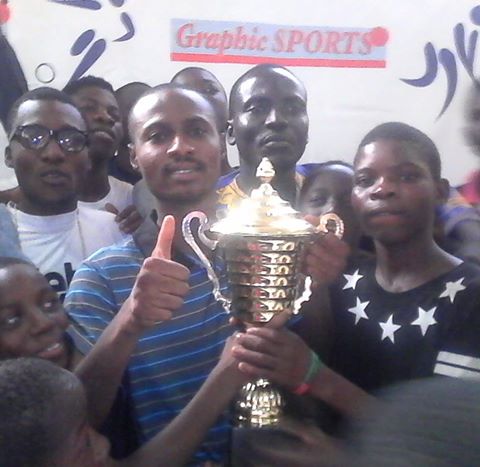 Felix Lartey been carried shoulder-high after his victory

Twenty-four-year-old Felix Lartey from the Ghana Immigration Service defeated Bernard Joe Sam from Ghana Revenue Authority 3-0 in the finals of the national table tennis top eight competition held at the D.G Hathiramani Sports Hall at the Accra Stadium on Saturday to scoop the top prize and a cash prize of GHC2000.
In a keenly contested competition Beatrice Gyasi from the Ghana Police Service defeated Bernice Borquaye from the Ghana Armed Forces 3-1 to win the female category and a cash amount of GHC1500.
In the third and fourth placed matches, defending champion Derek Abrefa of Immigration beat fellow pal from Immigration 3-1 to take the third place in the male category while in the female category Linda Annor of Immigration beat pupil teacher Gina Ackman 3-0.

In a competition which featured the best eight male and female players of the country , all participants were rewarded with appearance fees and cash prizes.
The vice chairman of the Ghana Table Tennis Association, Kenneth Ashigbey congratulated participants and noted that in furtherance with the resurgence of the sport, the school and colleges table tennis competition will be introduced.
He called for corporate support for the sport.

Linda Annor who was the defending champion in the female category before losing out 1-3 to Beatrice Gyasi was hopeful about the prospects of the game,
Meanwhile, the winners of the national table tennis league which ended last year, the Ghana Immigration Service men and women team were handed over their trophies.
The chairman of the GTTA Mawuko Afadzinu was happy about the interest in the sport among the youth and called for a more serious approach towards the game to make it a national past time.