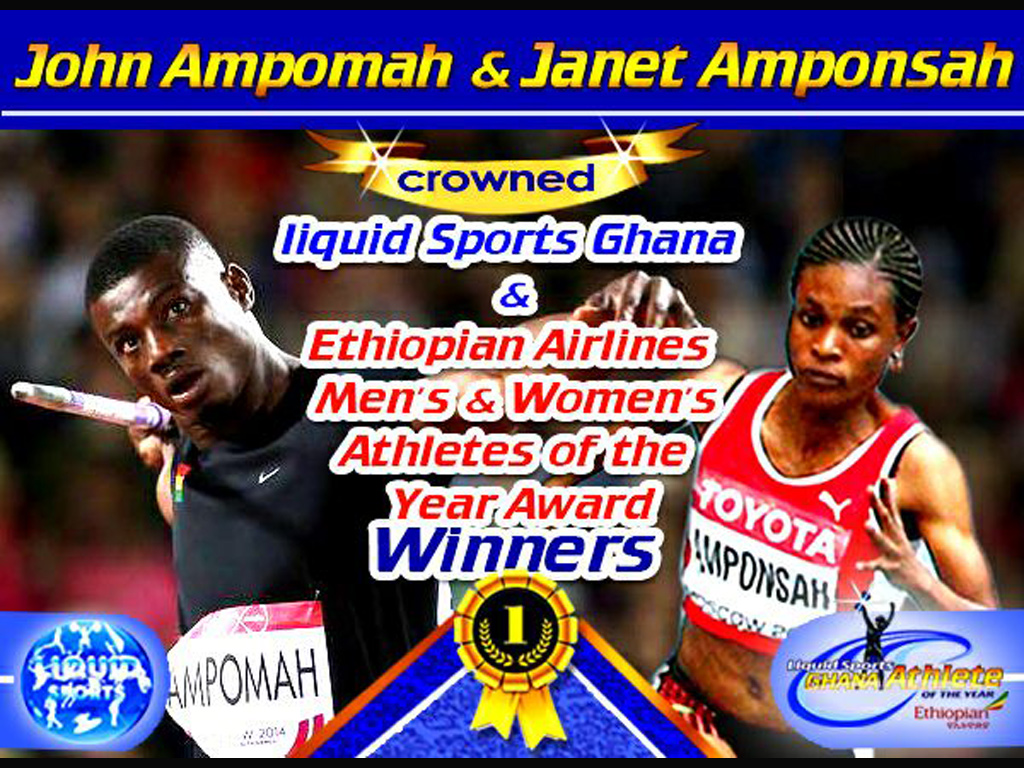 Both athletes excelled during 2015 athletics season, John Ampomah in the Javelin and Janet Amponsah in the 100m/200m events.

Ampomah became the first Ghanaian athlete to throw beyond 80 metres after throwing a spectacular 81.55m in April 2015 and 82.94m to win silver at the 2015 All Africa Games few months later.

He has broken the national javelin record an unprecedented nine times since 2012 when he came onto the national scene.

Sprint queen Janet Amponsah produced life time performances in 2015, clocking 11.29s in the 100m and 23.05 in the 200m events respectively to qualify for the 2015 IAAF World Championships. In the process, she recorded the fastest time ran by a Ghanaian since September 16, 2006.

Among her achievements for the year, she anchored the women’s 4x100m relay team to win silver at the 2015 All Africa Games (AAG) in Congo-Brazzaville and placing 4th in the 200m final at the AAG.

The award was made possible through the partnership between Liquid Sports Ghana one of the fastest growing sports website in Ghana and Ethiopian Airlines a major global player in the airline industry representing ‘The New Spirit of Africa’ to promote the growth and development of athletics in the country.

This is the second major project that Liquid Sports Ghana is partnering Ethiopian Airlines to undertake, following their successful partnership to deliver coverage of the 2015 IAAF World Championships to the Ghanaian audience last year.

The two winners were both based in the USA where they are currently pursuing their academic studies and sporting careers at the Middle Tennessee State University on Ghana Athletics Association sourced scholarships.

“I want to start by thanking God for myself and team mate’s ability and strength to do our best in raising the flag of Ghana high in athletics,” commented John Ampomah, who is also the national team captain of Ghana.

“To my family and supporters, I thank you for your well wishes and the encouragement. I would also like to thank Prof. Francis Dodoo, the GAA, GOC the Sports Ministry, associate coaches and my coach Dean Hayes for their continual support and opportunities.

“It is an honour not just to win the first ever Liquid Sports award but I am glad that our sport, athletics is also gaining the recognition it deserves.

“This recognition I believe will have much impact on some of us psychologically and this award will encourage all of us to strive hard and do our possible best no matter what it takes because now we know we have good people who will encourage us in all situations.

“I would like to encourage other corporate bodies to join hands with the government and help support our young and talented athletes not only in athletics but in the other sports as well. I would also urge the media to use constructive criticism when analyzing our performances and make it a habit to appreciate, celebrate and recognize our achievements.

“To me, I have always believed that Ghanaian athletes haves amazing talent, so I therefore dedicate this prestigious award to all my team mates. Hopefully, we will make Ghana proud again.” he concluded.

The managing editor of LiquidSportsGhana.com, Erasmus Kwaw, reflected upon the objectives of the award, praising the athletes for their stellar achievements.

“Indeed, it has always been our major aim to throw the spot light on our athletes and give the sport as much visibility as possible over the years and this is just the platform we have been craving for.”

“We want to celebrate the heroic 2015 achievements of our athletes who gave everything they had to lift high the flag of the country.

“We congratulate Ghana Athletes of the Year, reigning national javelin record holder John Ampomah and national 200m indoor record holder Janet Amponsah. Your performances in 2015 are an inspiration to the younger generation and examples of true sporting excellence.

“To break a national record is no mean an achievement, and to do so consistently over a period of three years is such a rare feat. It is our hope that John Ampomah will go on to qualify for the Rio 2016 Olympics this year as just a reward for his efforts over the years.

“Janet Amponsah, you showed grit and determination in 2015 where you run back to back qualification times at the West Texas A &M Twilight event on 25th April. We salute you both and all the other nominees for the awards.

“Finally I wish to thank all the athletes, coaches, panel of judges, staff and supporters of Liquid Sports Ghana who helped us to bring this award into existence. God richly bless you all for your efforts.

“Our appreciation also goes to both the Ghanaian and international media for publicising news about the awards.

“It was through you that the inaugural Liquid Sports Ghana-Ethiopian Airlines Ghana Athlete of the Year Award has become the most talked about awards in recent times. Thank you and May God bless you all,” Kwaw concluded.

As part of the awards, our expert panel also decided to list some of the top athletics prospects for Ghana.

Below is the ranking using primary data from the Ghana Athletics Association’s end of year 2015 rankings.

How the award was decided:

The award was voted for by a group of 16 people made up of international journalists, an IAAF expert, Ghanaian journalists and a select number of coaches.

Firstly, a selection panel short listed the top 10 athletics performances for both men and women using the Ghana Athletics Association’s end of year 2015 rankings as the primary data.

The nominees were determined using the IAAF’s Scoring Tables of Athletics, performance at the 2015 All Africa Games and 2015 Commonwealth Youth Games (CYG), World and African rankings, and the national record of the athletes.

From those finalists, the voting panel selected the male and female Liquid Sports Ghana Athletes of the Year respectively.

The international cast of athletics experts included renowned IAAF Expert and French journalist Yves Pinaud, who is the official statistician of the Confederation of African Athletics (CAA).

In addition to that, three Ghanaian based coaches namely: Christopher Darko-Amankrah, who accompanied Team Ghana to the 2014 IAAF World Junior Championships in Eugene; Salamatu Musa, who accompanied Team Athletics at the 2015 Commonwealth Youth Games in Samoa, and Northern regional coach Abu Alhassan were also part of the voting panel.

The list also had long jumper Richard Seklorwu, who made history by becoming the first Ghanaian to win a gold medal at the Commonwealth Youth Games, after winning the boy’s long jump with a leap of 7.67m, made the top 10 list.

The top-voted athletes for the men and women’s categories were declared winners of the awards.

Below is the full list of voting panel members for the award: