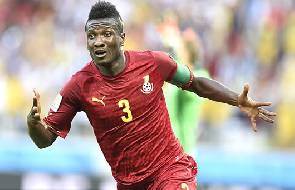 Ghana captain Asamoah Gyan says he would not lose a night’s sleep if he misses the Africa Cup of Nations because it is not prestigious for him.
The Shanghai SIPG striker adds that playing in the FIFA World Cup finals is his preoccupation
Gyan was speaking on recent speculations will would be stripped off the captaincy and ousted from the Black Stars before next year’s Nations Cup finals in Gabon.
“If I don’t make it to AFCON it isn’t painful because no one respects it but I will be worried if I am not present at the World Cup,” Gyan told Kumasi-based Angel FM.
“The reason is everybody respects the World Cup. The only thing that can make me worried is not representing Ghana at the AFCON but not the tournament itself.
“Any Ghanaian player who misses AFCON won’t be sad but will be very sorry if he fails to appear at the World Cup.”