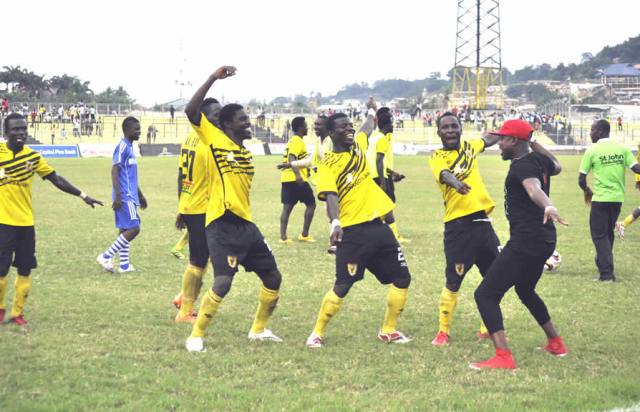 AshantiGold improved on their run of performance in recent times as they defeated M.O Bejaia of Algeria by a goal to nil at the Obuasi Len Clay Sports Stadium in the first leg of the CAF Champions leg on Sunday.

The only goal of the game came from an unlikely source of goal for the Miners when left back Tijani Joshua lobbed the ball over the head of the goalkeeper for Bejaia in the 61st minute.

Bashiru Hayford made a lot of chances to the side that lost 0-1 to Medeama SC last week in the Super Cup: Hudu Yakubu replaced Augustine Sefah at right back, Amos Addai placed ahead of Emmanuel Osei Baffour, Alhassan Nuhu played ahead of Joseph Atto Bissah and Robert Dabuo started ahead of Fatau Dauda.

Ashgold pressed very hard for goal right from the blast of the referee’s whistle and created several decent chances infront of goal but failed to utilize them in the first half.

One of the best opportunities for the Miners came in the 30th minute when Amos Amoah in a solo effort went through the Bejaia defence, but indecision on his part enabled their defence to neutralize his effort. The Miners also had couple of free kicks, but the likes of Hudu Yakubu and Kadiri Mohammed’s efforts were not enough to give the hosts a goal.

M.O Bejaia started delaying the flow of the game in the first half and that informed the decision of the referee to let the game travel for additional 3 minutes in the half.

There was a lot of drama in the 2nd half as Ashgold broke the dead lock and Bejaia had a man sent off and their goalkeeper replaced as a result of an injury.

Backed by unrelenting, vociferous and partisan Obuasi fans throughout, Ashgold sent the Len Clay Stadium into wild jubilation when Tijani Joshua lobbed the ball over the Algerian goalkeeper to give the Miners the goal that stood to become the only goal of the game.

The Miners should have capitalized on the numerical disadvantage of Bejaia when they had a player sent off for foul play and their goalkeeper replaced due to injury, but the Algerian club were resilient in defence as they soaked the pressure of Ashgold and caught them from time to time on the break.

The 2nd leg will be played in two weeks’ time in Algeria.