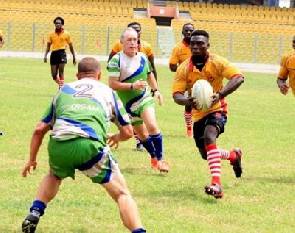 A game in the Ghana Rugby league

Cosmos Buffalo qualified for the finals of the Ghana Rugby Football Union league final after they defeated defending champions, Dansoman Hurricanes in the semi-final at the Accra sports stadium on Saturday,whilst fellow finalist Conquerors also defeated Idas in the other semi final clash.
The Buffalo won the game by 13-7 scoreline and will face Conquerors in the final who also defeated Idas in the second semi-final by 39-6 and the victory has placed them in pole position to win the final on Saturday, 20th February.
Both semi-finals encounters saw very enthusiastic young and old men who were really fired up for a place in the finals especially from the newcomers Conquerors who happens to be a newly formed club and appearing in the league for the first time is yet to see a defeat after playing seven matches in the championship
According to Mr. Amuzuloh Salim, Coach of Cosmos Buffaloes, he is very satisfied with the performance of his players adding that most of the players were suffering from various degrees of injuries.
The date of the finals is the Saturday,20 February 2016 at the Accra sports stadium.