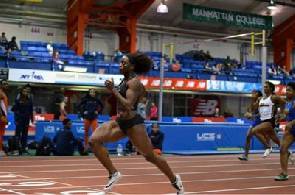 Female athlete Flings Owusu-Agyapong has set a new national 200m indoor record.
The Ghanaian sprinter broke the 200m indoor national record with a 23.34 seconds breaking the old record of 23.40 seconds which was set by Janet Amponsah in March 2014.
Owusu-Agyapong, who won the 4x100m silver medal at the 2015 AAG, is bent on winning gold at the IAAF World indoor Championship.
The event is scheduled to come off at the Oregon Convention Center in Portland, USA on May 17.
The 27-year-old sprinter will be facing stiff opposition from some great athletes around the World in the 16th edition of the Championship.
Owusu-Agyapong is currently ranked 7th in the World and 1st in Africa.