GHALCA schooled on marketing at congress 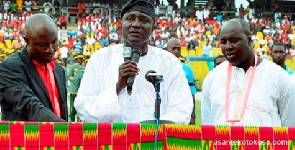 Pro-vice Chancellor of the University of Professional Studies Accra (UPSA), Dr. Oko has revealed to the executives and members of the Ghana League Clubs Association (GHALCA) at the association’s congress on how to market and sell ‘football’ in the country.
Speaking at the congress, Dr. Oko admitted Ghana football has challenges like all other institutions but the crowd of spectators that troop into our various stadia to watch traditional clubs play each other like, Eleven Wise against Hassacas in the Sekondi-Takoradii derby, Hearts vs Olympics in the Accra derby, Bofoakwa play BA united in the Sunyani derby and so many more justifies there’s still hope for football in Ghana.
The pro-vice chancellor during his power point presentation outlined the strength, weaknesses, opportunities and threats that face football in Ghana. During the presentation, Dr. Oko listed advised the administrators of the game to in addition to the strength of football in Ghana (enthusiastic football fans, football talents and the global appeal to the game) should work around the weaknesses of the game (poor football pitches, few super stars, poor remuneration,
He said, “Ghanaian football clubs should focus on the style of play exhibited on the field and the rest (sponsorship and the decline in spectatorship) would increase as the admirers of the game so desire.”
“The weaknesses in relation to quality of football, sponsorship and the negative perception view carried by critics and skeptics of the game will be curtailed only if the clubs work around it than complaining,” he added.
GHALCA will go to the poll on April 21st to elect new chairman, vice-chairman and executives for the next four years.