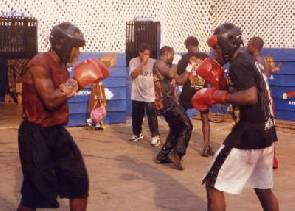 The president of Ghana Amateur Boxing Association (GABA), Gideon Quartey has informed sportscrusader.com the Black Bombers have picked the positives from the negative publicity their Olympic games preparation has gotten them.

The Black Bombers are unable to secure camping space at the Theodosiah Okoh National Hockey Pitch – the reason being that the Ghana Amateur Boxing Federation is unable to raise an initial amount of 1000 GHC ($257) requested from the National Sports Authority (NSA), who manage the facility.

Gideon Quartey in an interview with sportscrusader.com revealed the association has been able to psyche the boys up to be much ready and tougher for the games than before all thanks to the unfair treatment meted out to the boxers.

He said, “We have conscientised the boys, we have spoken to them to see that their future is at stake and though they will be representing the nation it is their individual names that will be marketed in the long run should they excel”.
“Initially you (Boxer) qualify to the Olympic games as an individual who is there to fly the flag of Ghana and that should be enough motivation to carry them through,” he added.

The Black Bombers are scheduled for a three nation tournament in Cote d’Ivoire later this year.