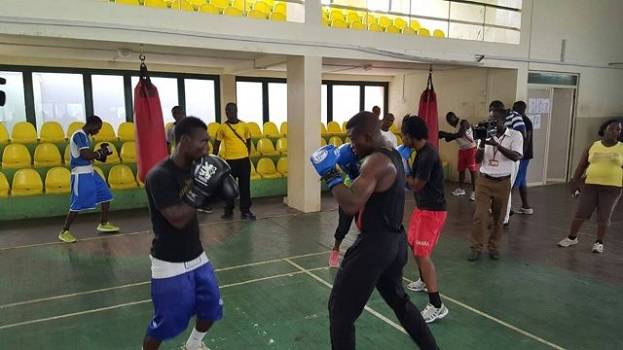 Gideon Quartey, President of the Ghana Amateur Boxing Association (GABA) has admitted the association is very disappointed in both the Ministry of Youth and Sports (MOYS) and the National sports authority (NSA) treatment towards the Amateur boxers (Bombers) Olympic preparation.

The team is currently managing with non-residential camping at the D.G. Hathiramani Hall of the Accra Stadium after the Black Bombers were unable to secure camping space at the Theodosiah Okoh National Hockey Pitch – the reason being that the Ghana Amateur Boxing Association is unable to raise an initial amount of Ghc1,000.oo (USD$257) requested from the National Sports Authority (NSA), who manage the facility.
The president admitted the association has been surprised and disappointed with the treatment meted out to the bombers who are Ghanaians preparing to represent the nation and been asked to pay amount before using a state facility is preposterous.

“I am a little down because we have struggled to gather these boys and the nation has deliberately been of less assistance to the association. The boys (boxers) who will be representing the nation and salute the national anthem have totally neglected and no input to support the boys going into Olympic qualifiers,” he mentioned to sportscrusader.com

The Black Bombers are scheduled to participate in a qualifier in Cameroun next month and will present 12 boxers for the event.