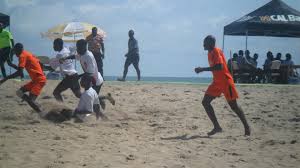 Another milestone was chalked  in the life of Ghana Beach Soccer when the executives of the association GBSA, together with officials from Cal Bank  (sponsors of the league) met with the media at the Press Centre of Accra sports stadium to deliberate on issues affecting the growth & development of the game and the way forward.

A lot of issues were raised with key among them includes lack of access to club officials, highlight of each week matches on TV, effective use of social media to  porpularise the sports, seminars for the media personnel to be abreast with the rules and regulations of the game, welfare of the players should be paramount, what the association is doing to extend the game to non-coastal areas, why the sponsors are not using some of the key personalities who have excel in the game to in their adverts.

Also there should be an Awards scheme to award deserving stakeholders in the game.

In response, Madam Antoinette from the marketing department of Cal Bank said they’ve taken note of everything and will report back to management.

President of the association Yaw Ampofo Ankrah said, they’ve also taken note and will work on it to help improve the game. He also use the opportunity to announce a new water sponsor for the league who takes over from voltic. The league continues these weekend with week 17 fixtures at the Laboma beach.