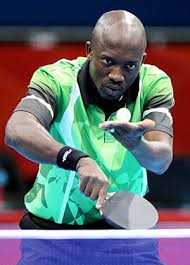 History maker, Segun Toriola (NGR) joins the ‘7 Club’ after qualifying as the first Africa to make it to seven Olympics Games!

Tunisian star, Saifa Sadani join the league of Olympian as she beat Sarah Hanffou to the final slot.

Ghana was represented by Top seeds Felix Lartey AKA Spider and Derek Abrefa.

Africa’s best Table Tennis Players gathered in Sudan to determine who qualifies to represent the continent at the up coming Olympic Games in Brazil dubbed Rio 2016.

Ghana;s team has really improved, but lack of exposure is their major problem and Derek Abrefa has urged the sports authorities to support them as they have what it takes to conquer Africaand the world if the opportunity availes itself.