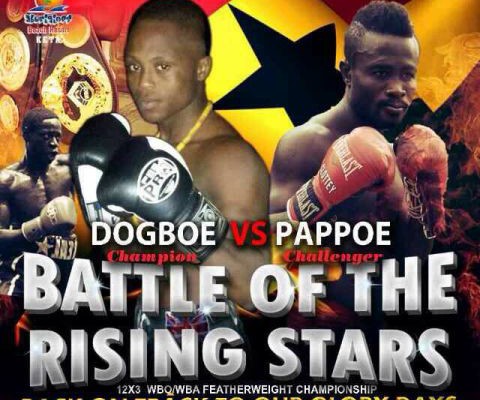 Undefeated UK based Ghanaian boxer, Isaac Dogbe has promised to issue out a boxing lesson to his Ghanaian fans by knockout his opponent as he mounts the ring on Saturday February 20, 2015.

The World Boxing Organization (WBO) Africa and World Boxing Association (WBA) Pan Africa featherweight champion, will make the first defence of his title when he takes on fellow Ghanaian Michael Pappoe in Accra.

The bout to be fought at the Kaneshie Sports Complex is the main event of an eight-bout bill being put together by Aborigines Beach Resort in collaboration with the Ghana Boxing Authority (GBA).

And Dogbe (12-0, 8KOs), said he will successfully defend those titles by stopping Pappoe inside the distance to keep his undefeated record intact and move on to greater heights after.

“I ask the fans to come to the Sports Complex early as I have something special in store for them on the day,” he said at the press conference preceding the fight.

He promised to put up a show that will force fans of Pappoe turn on their boxer as he will be helpless to save the situation adding that, “he is not in my class and I will teach him a great boxing lesson”.

Pappoe, who have lost two of his 17 fights, accepted the challenge and asked the champion to come prepared for a shocker as he is ready to deliver it and make it count on the day.

“I have wanted this fight badly, and now that it’s made, I want Dogbe to understand that he will be facing a boxer he has not encountered before both as an amateur and a professional.

He promised to take the title away from the champion by delivering a performance that will prove that indeed he has earned it and afterwards, will look to challenge for bigger things.

This fight has been dubbed ‘the battle of the rising stars’ and one is bound to lose as two of the best boxers on the from Ghana contest for the ultimate at stake.

One of the supporting bouts will see Isaac Sackey take on veteran Galley Cudjoe in a super bantamweight contest that will also be very interesting on the night.