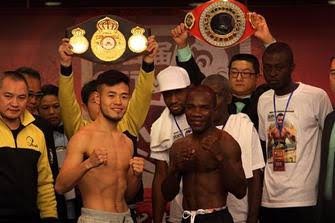 Ghana’s wait for another world champion may last longer as the latest attempts by Raymond Commey and Tackie Annan failed to yield positive results.

Raymond Commey and Tackie Annan were unable to stand up to opposition last week in China on a bill that was viewed by a reported 200 million fans around Asia.

Tackie Annan who went into his bout against Bai Shan Bo (7-0-1, 4KOs) with a record of 6 wins 3 losses started off on a good note as the aggressor.

With the WBC Youth World Super Lightweight belt up for grabs, Tackie jabbed and worked on the body of Shan. As fate would have it, Tackie injured his shoulder after throwing a punch at Shun and this is said to have caused some shoulder bone friction.

The unfortunate incident rendered the result a blessing in disguise for Bai Shan Bowon who was handed a Technical Knockout (TKO) win according to the rules.

Raymond “Chorkor Banku” Commey then became Ghana’s only hope following Tackie’s misery. The 28 year old Commey before this bout had won 10 out of 13 bouts whilst his opponent Qui Xiao Jun a.k.a.

“The Dragon’ had a record of 18 wins and two losses. Commey also started well but succumbed to a fight back by Jun who eventually landed the more effective punches.

This performance earned Jun a unanimous decision with all three judges scoring the bout 118-109. This also meant that he has successfully defended his title he won three months earlier in Monaco against Amor Belahdj.