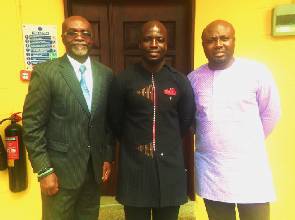 The Director-General of the National Lottery Authority (NLA), Brigadier General Martin Ahiaglo (retd) has pledged the support of the NLA for the 2016 Peace Match aimed at maintaining peace during and after the presidential and parliamentary elections in November.
Brigadier General Ahiaglo (retd) said without a peaceful atmosphere in the country, the operations of all corporate bodies would be halted, hence the need for corporate Ghana to support the Peace Match.
He also pledged to offer the needed support to the two-leg football match slated for June 8 and June 11 when Ghana’s Peace Ambassador for the 2016 General Election, Stephen Appiah, paid a courtesy call on him at his office in Accra yesterday.
The two-leg matches will be played by selected international stars and Kumasi Asante Kotoko at the Baba Yara Sports Stadium on June 8, and at the Accra Sports Stadium on June 11, when the Black Stars will host the international select side.
Appiah, a former Arsenal defender, Sol Campbell and George Boateng, formerly of Middlesbrough are likely to feature for the international select side in both matches.
Brigadier General Ahiaglo (retd) commended Appiah for his laudable initiative, vowing that the NLA would offer him the requisite support to enable him to play a useful role as the national Peace Ambassador.
The former Black Stars skipper, Appiah, later briefed the NLA boss about preparations for the games which he said would reduce tension in the country as the elections drew closer.
“This game is my key project as the Peace Ambassador for the 2016 elections, and together with the match organisers, Primeval Media, we hope that football will once again unite this nation in a time of tension”.