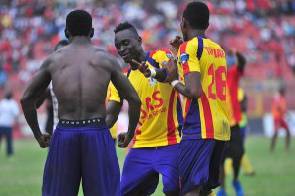 Hearts 1-0 Edubiase- Kenichi off with 3 points

Hearts of Oak players in jubilation

Hearts of Oak got their 2015/2016 Ghana Premier League season to a flyer after a hard fought 1-0 victory over New Edubiase at home.

The Phobians took advantage of the home crowd to force a victory thanks to a Samuel Yaboah strike.
Coach Kenichi Yatsuhasi named four debutants in his set up with Mustapha Essuman, Richard Akrofi, Ibrahim Samudeen, and Kennedy Appiah all given a start in the game.
But it’s fair to say the hero of the day was Samuel Yeboah who ensured the thousands gathered at the Accra Sports Stadium smiled on their way home.
New Edubiase missed the creativity and industry of Nuhu Fuseini and Alhassan Fuseini who have moved on to AshGold.
Thomas Abbey took the game to Edubiase in the first half and came close on the 27th minute but saw his effort bounce the post after some good work from Samudeen.
The chance from Thomas Abbey seemed to have awoken Edubiase who created their own chance through Ibrahim Sammed.
The second half saw both teams play cautiously but Hearts of Oak had efforts from Essuman and Samudeen all saved by Baba Mensah who was in Post for New Edubiase.

But the moment of glory came on the 82nd minute when Samuel Yeboah took advantage of poor defending on the part of New Edubaise to sweep home the only goal of the game.
The goal brought a response from Edubiase with Soulama Abdoulaye pulling off a finger tip save from Haminu Dramani on the 85th minute.
Both sides tried as much possible to add to the scoreline but the game ended with Hearts of Oak taking all three points at home.