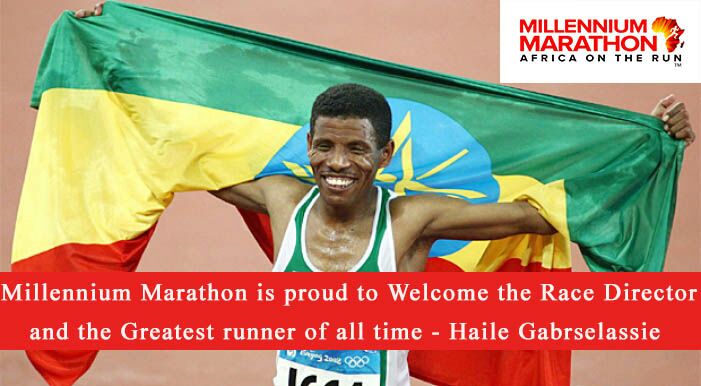 This year’s Millennium Marathon will be held on the 3rd of September, 2016 with prizes worth over $150,000 up for grabs. Speaking at the programme. Hon Elvis Afriyie Ankrah of the Office of the President said HE John Dramani Mahama has promised to participate fully in this years event.

He noted that Sports plays many important roles in the development and promotion of a nation and hoped that the private sector would contribute to make it a success like the last edition.
He urged the youth to be part of the event and try to stay in school and learn hard to become useful citizens who can contribute to the economic growth of the nation.
Hon Dr. Mustapha Ahmed who played his last role as Youth & Sports Minister said he was happy to be associated with the Marathon which attracted lots of people to Accra and wished the organisers and participants the best.
He was elated that this year’s event is being organised with support from the United Nations Sustainable Development Goal which Ghana’s President John Dramani Mahama is Co Chairman.
He prayed that the district and Regional events will produce good runners who can compete at the main international race which hopes to attract elite athletes from all over the world.

He hinted that the Marathon will expose the country’s rich culture and open up business contacts and connections.
The Mayor of Accra, Hon Alfred Okoe Vanderpuije said the success of the 2015 edition which was run by 17,000 is what has enticed more companies and people to come on board this year. He said it is good to run to shed weight and commended Ambassador Ashim Morton for coming up with the Millennium Marathon idea.
Haile Gebreselassie, the Ethiopian World and Olympic Super Star noted that running is every thing and if Africa wants to catch up wit the world and over power, then Africans must run faster.He advised the youth to participate in the event
“A marathon in Africa, bringing together long distant runners from all over the world to compete, have fun and promote health, tourism & culture” that is the theme of the event according to Carthy Morton, a member of the organisers.
The 10 regional events to precede the main Accra Millennium Marathon takes place from March 12 to June 15, 2016. About 10,000 participants are expected in the regions.
The Millennium Marathon will this year fully implement a Professional Athlete’s Programme (PAP) for Ghanaian long distance runners to train and enter athletes into world marathon and long distance events.

Last year, the Millennium Marathon Sports Co. sponsored some winners to undergo training in Ethiopia and participate in the Great Ethiopia Run in Addis Ababa.
The Millennium Marathon is sponsored by companies including Ethiopia Airlines, Dizingoff Ghana, Ghana Investment Bank, Adidas and others.
According to Carthy Morton, opportunities are there for aspiring companies and it is better to join on time and be recognised in the 0 regions a a partner of the biggest sporting event in Ghana.
All are interested in any of the regional marathons must kindly be on the lookout for the advertised dates.
Credit: Sammy Heywood Okine