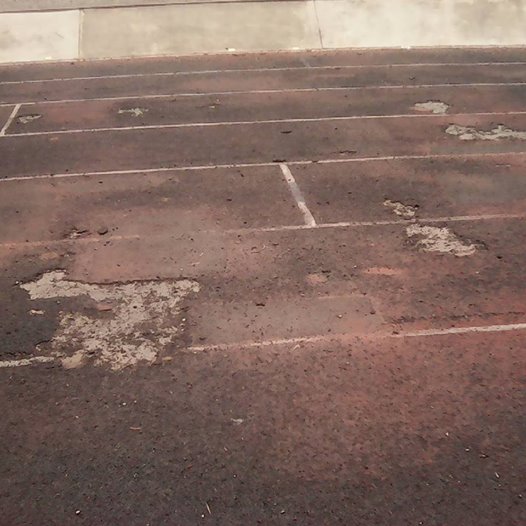 The poor state of the tartan tracks at the El-Wak Stadium is proving a major hurdle for athletes,  but  the Ghana Athletics Association (GAA) seems to be OK with the state of the facility.

However, the deplorable state of the only standard athletic track in the capital means athletes looking to excel might sustain injuries in the process of evading divots on the tartan tracks.
“Any person with athletic ability can register and compete in any discipline they are interested in provided we have the equipment,” Dr Marc Dzradosi, the Treasurer of the GAA told the Graphic Sports yesterday in an interview.
“Our only constraint is pole vault, where we may not get the pole required for the jump.
“The event is open to anyone and it is meant to nurture and develop local talent. It is also open for free to all spectators and participants”.
Addressing the state of the track, Dr Dzradosi said despite the poor state of the track athletes could still record impressive times with the only threat being the risk of injury.
“They can make the time because it is not the whole track that is in a poor state but there is also the risk of injury because they will be using spikes.

“El Wak belongs to the Ghana military so it is very difficult for a private individual to come in to rehabilitate the place. We will be grateful if we could get access to a better track in the capital”.
He disclosed that the first Circuit Championship will take place on February 27 in Bolgatanga.

At the time of filing this news only one Ghanaian athlete has qualified for Rio 2016, but the President of the GOC who is also President of the GAA is sure that more athletes will qualify for the first Olympic in South America