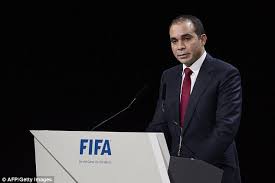 Prince Ali already plans to test FIFA’s resistance to transparent voting booths by having some sent to Zurich ahead of Friday’s vote.

FIFA, which is this week expected to vote in wide-scale reforms to ensure openness and guard against the corruption which has engulfed it in recent times, insists it is sufficient for delegates from the 209 voting nations to hand over cameras and mobile phones before entering the booths at Hallenstadion in Zurich.

Press Association Sport understands Prince Ali, one of five candidates to succeed Sepp Blatter in Friday’s vote, wishes to be made aware of the rules in case delegates flout the ban.

It is understood reports Prince Ali has called for the election to be postponed are premature.

A submission on the use of transparent voting booths has been taken to the Court of Arbitration for Sport.

Voters reportedly documented how they had voted in June’s presidential election, which Blatter won ahead of Prince Ali before resigning days later, prompting this week’s extraordinary congress and leading to Prince Ali’s request as he bids to ensure a fair election.

Sheikh Salman, the Asian Football Confederation president, and Infantino are considered the favourites to succeed Blatter, who first became FIFA president in 1998.