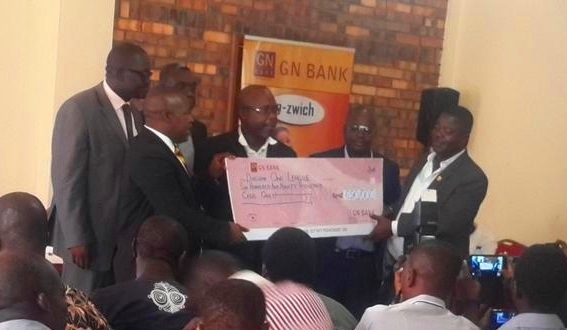 GN Bank has presented its annual sponsorship of GHC 690,000 to the Ghana FA to support the clubs in next season Division One League.

The banking firm, which paid GHC 690,000 in the first year of the sponsorship deal, presented the cheque for the second tranche during the launch of the Division One League at the Coconut Grove Hotel in Accra on Thursday.

GN Bank, which signed a 3-year-deal with GFA worth GHC 2.1 million, will pay a third tranche of GHC 793,500 for the sponsorship of the second tier league next term.

Mr. Allen Quaye, General Manager of Banking Operations who presented the cheque on behalf of the GN Bank said sports or football plays a key role in the development of the nation and they are proud to be associated with Ghana Football because a lot of people benefit from the game and the Division One League is played through out the country.

He noted that football creates employment and entertainment, as well as promotes the image of the nation.

He urged the 48 clubs to aspire to play a clean league, without much officiating problems, and appealed to the fans to watch the matches which would by shown on the channels of the GN Group of media companies.

Lawyer Kweku Eyiah who represented the GFA promised a very successful season and thanked the GN Bank for supporting the GFA.

Nii Komiete Doku Greater Accra Regional FA Chairman and Chairman of the Referee Committee of the GFA assured football fans and the clubs of a clean season, just like last year’s or an improvement. He also warned the match officials against bribery and corruption which many stakeholder frown upon in Ghana Football.