MTN Rewards Heroes of Change For Their Selfless Acts 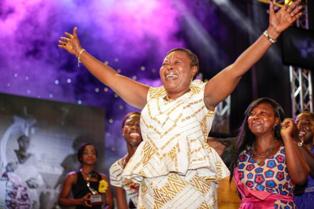 MTN Rewards Heroes of Change For Their Selfless Acts

For her selfless acts to society especially children whose mother passed on through giving birth, Madam PaulinaOpei,Founder of “Save our Lives Orphanage” and a trained nurse was crowned the overall winner of the MTN Heroesof Change Season II on Friday 19th February 2016 at the Accra International Conference Center.
Guests and well-wishers at the Accra International Conference Center auditorium clapped amidst shouts of joy and fireworks when Madam Paulina Opei was announcedthe overall winner of the MTN Hero of Change. Overwhelmed with emotions, the children of the winner rushed upstage to congratulate her.

An emotional Madam Pauline Opei,in tears, struggled to deliver an acceptance speech and when she finally managed to speak she mentioned how grateful she was to have received such a recognition. She thanked MTN Ghana Foundation for promoting their stories and good work. She recounted the challenges of raising up babies whose mothers died through childbirth. She said, “I thank the MTN Ghana Foundation which has made it possible for me to receive this great recognition. When I started this noble work twenty two years ago, I never did it because I wanted recognition and reward”. Today I have been honoured and I am very grateful”.
For her prize, she received GH¢100,000 a plaque and a citation. The prize money is to enable her expand the work she is doing.
The Dr Emmanuel Bidzakin of the Faith Hospital, won the Health category award, whilst the Education award was won by Rev Jehu Appiah. The Economic Empowerment category was won by Nayina Karim. Winners in the categories of health, education and economic empowerment received a plaque, a citation, and GH₵20, 000 each to support their work in the communities.In addition, each of the other six finalists received GH₵5, 000.00 cash.

Speaking at the event, the CEO of MTN Ghana Mr. Ebenezer Asante said“the stories of the heroes should challenge all of us to go the extra mile in everything we do. For us at MTN, the greatest result we expect to realize from this project is to see more heroes being borne.”
Mr. Asante further reiterated the significance of MTN Heroes of Change as an initiative that appreciates heroes in our societies. He said, “the responses we received when we made a call for nominations show that people are very passionate about giving back to their societies. Having receivedover a 1,000 nominations for Season II alone, we understand that if we are really selfless, our actions will definitely be appreciated by others”.
Guests at the awards event were also entertained by Becca, KwabenaKwabena, El Dunamis Minstrels, Abena of MTN Hitmaker Season IV and Steve Bedie.
In attendance were various dignitaries including the South African High Commissioner to Ghana, Her Excellency Lulu Mary-Theresa Xingwana, the Awoamefia of Anlo Traditional Area,TogbeSri III, CEO of the Telecoms Chamber, Mr. KwakuSakyi Ado, amongst others.
The atmosphere at the AICC was one that depicted patriotism and inspired hardwork from individuals as screens projected the national flag and adinkra symbols. The display of the Ghanaian culture and stories of the MTN Heroes of Change inspired the can-do spirit in everyone present.
MTN Heroes of Change was launched in July 2013 with the aim of identifying and recognizing selfless people who continue to sacrifice their time and resources to improve their communities and brighten lives. Dr. Abrokwa-Yenkyira, a plastic surgeon and Founder of Grafts Foundation, emerged the ultimate winner for the maiden edition of MTN Heroes of Change in 2014.
MTN Heroes of Change was also awarded CSR Program of the Year 2015 by the Head of State Awards (HoSA) Scheme.

The MTN Ghana Foundation was established in November 2007 as the vehicle to select and implement MTN’s Corporate Social Investments. MTN Ghana Foundation has three areas of focus -Health, Education and Economic Empowerment. From inception to December 2015, the Foundation had undertaken 102 major projects across the country. Notable health projects include: construction of a Neonatal Care Center for Tamale Teaching Hospital, refurbishment of the 2nd floor maternity block of the Korle Bu Teaching Hospital, construction of a maternity block for Ejisu Government Hospital, and construction of an Emergency Center for Atua Government Hospital. Education projects undertaken include: construction of a boys dormitory for Akropong School for the Blind, construction of a six-unit classroom block for Kodjonya Millennium School, establishment of 10 MTN ICT Learning Centers in each of Ghana’s 10 regions and the institution of an Innovation Hub at KNUST to promote Telecoms Engineering and Research. Key projects undertaken in Economic Empowerment include: the construction of shea butter processing centers, provision of seed capital and skill training for Women of TizaaDini Association of Yendi and the Sung Suma Women Association of Wa.
Credit: Sammy Heywood Okine