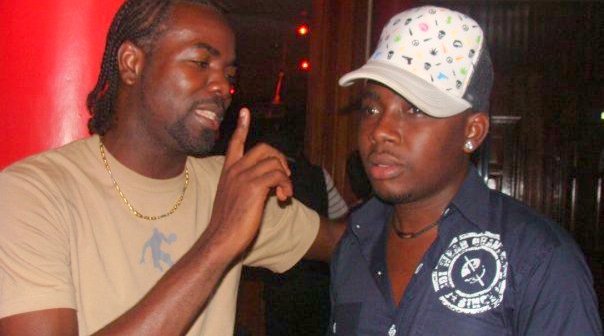 The ‘Choir Master’ as he is affectionately called, last week posted an old picture of him on Facebook with Angelique Kidjo and radio presenter KKD and wrote a few things under it which reminds him of his past.

Among the things he wrote were issues he has with the Ghanaian footballer, accusing him of not fulfilling his obligation of paying for their album (Angelina) in full.

This message on his Facebook wall went viral, with many accusing the Black Stars player of cheating the trio back then.

However ghanafootballnews.com got in touch with Prince Tagoe and he narrated the entire incident stating that he decided to let the matter go, but he feels the need to set the record straight for future references.

“When I heard this issue and read it on his wall, I decided not to comment on it because even his own former colleagues Steven Fiawoo(PrayeTiatia) and Nana Kwame (Praye Tenten) called me to express their shock, because they know all that I did for them back then with regards to the said album (Angelina).

“But I feel the need to set the records straight. To start with I was approached by one of the guys who was my childhood friends Steven Fiawoo(PrayeTiatia) to come to their aid since their album was locked up at the studios for unavailability of funds.”

“It’s really wasn’t my thing, but looking at the relationship I had with Stephen, I decided to help and paid the various sound engineers.”

“You know in music an album is not recorded in one studio and I paid all these sound engineers with my own money and that was not part of the 300 million old cedis he is claiming”, Prince Tagoe mentioned exclusively to ghanafootballnews.com.

He said after that, he saw so much potential in them and decided to help them make it big, especially after listening to the tracks of the album.

He thus decided to buy the album and help promote it and after series of meetings, both parties agreed on ghc 30,000 (300 million old cedis).

“Yes I bought the album and we all agreed on the price and that money was paid in full and any of the other two guys can attest to it.”

“What surprises me about Eugene’s statement is that apart from buying the album, I launched it with my own money at Golden Tulip Hotel in Accra and paid for food, drinks and even other artists who came to perform on the night.”

“The records are there, and anyone can go and check how much I spent on the launch alone. It was more than 500 million.”

“On top of that I financed the shooting of the Angelina video which was one of the best in the country back then.”

“I could go on and on but it is never in my nature to do something for someone and go about trumpeting it, but I must admit I am shocked at his recent comments, and to add that I think I have money, leaves a sour taste in my mouth”, Prince added.

He labeled him an attention seeker who only wants some media hype for his crestfallen musical career, an action that has hit the rocks since he broke away from the group.

“I really don’t know what motivated him into saying or writing those things, but I feel he wants some media attention so he has to use my name. He is just ungrateful. But I want to put it on record that I have no issues with him or any other member of the ‘Praye’ group”, the seemingly angry Prince Tagoe noted.

They three started the group and adopted the name ‘Praye’ which means broom, an indigenous symbol of unity in the Ghanaian community, reflecting their belief in combining their different and unique talents that have been harnessed to make them one of the most entertaining groups in Africa.

The group is no more as all three have parted company, with many saying it was as a result of money issues.