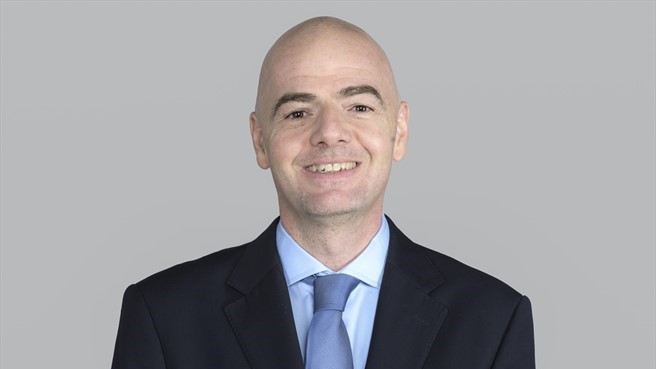 Fifa has elected Gianni Infantino, a European football administrator born just six miles from Sepp Blatter, as its new president in a bid to restore the world governing body’s reputational damage overseen by his disgraced predecessor.

Greg Dyke, the Football Association chairman who had backed Infantino, hailed him as a “straightforward guy” whose victory was a new start for Fifa. Dyke said that England would now consider bidding for the 2030 World Cup.

Everything you need to know about Gianni Infantino, the new Fifa president

However, the Swiss-Italian Uefa general secretary, who entered the race only when his boss Michel Platini was suspended then banned for six years for accepting a “disloyal payment” from Blatter in 2011, faces an uphill task to overhaul Fifa’s battered reputation.

Infantino, who spent €500,000 of Uefa funds touring the globe in the run-up to the election, triumphed over the controversial Asian Football Confederation president, Sheikh Salman bin Ebrahim al-Khalifa, in the second round of voting by 115 votes to 88.

The Bahraini had assumed his presidential bid would end in a coronation when he resolved to stand following Platini’s withdrawal in October, but his campaign has been marred by strenuously denied allegations over human rights breaches and vote-buying in previous elections.

After Infantino took a narrow 88-85 lead in the first round of voting, with the Jordanian Prince Ali bin al-Hussein in third place on 27 and the French former Fifa executive Jérôme Champagne in fourth with seven, he seized the initiative. Infantino’s energetic campaign, together with promises to more than double development money dispensed to Fifa’s 207 federations to $5m over four years, won the day.

“I want to be the president of all of you. I travelled through the globe and I will continue to do this. I want to work with all of you to restore and rebuild a new era where we can put football in the centre of the stage,” Infantino told the delegates following his victory. “Fifa has gone through sad times, moments of crisis. But those times are over.” Later, he told the media: “We enter now a new era. We’ll restore the image of Fifa and make sure everybody will be happy with what we do.”

His pitch also included a boast that he had vastly increased Uefa’s revenues, promising to do the same for an organisation now staring at a $550m financial black hole. “It’s your money, not the money of the Fifa president,” he had told the delegates to applause. “The money of Fifa has to be used to develop football.”

The 45-year-old, who has been at Uefa for 15 years and general secretary for the past seven, promised to “bring football back to Fifa” but must first lift it off its knees following eight months of chaos and crisis. Ongoing US and Swiss investigations are understood to have a long way to run.

Infantino insisted that he could reunite football, despite the rest of the world often viewing Europe as over-powerful, and could afford his election promises by increasing revenues and cutting costs. “I don’t agree that football is divided. Today was an election, not a war,” he said. “I’m a candidate of the whole world and football. We have to build bridges, not walls.”

The chief executive, Martin Glenn, said the English FA could play a key role in reforming Fifa. “We’ve lobbied hard for change, even when it’s been uncomfortable for us,” he claimed.

The crisis, set in motion by the decision in 2010 to hand the 2018 and 2022 World Cup finals tournaments to Russia and Qatar, accelerated dramatically in May when US prosecutors unsealed an indictment alleging a “World Cup of fraud” and arrested a string of senior executives on charges of money laundering and corruption.

Infantino becomes just the third Fifa president in 40 years personified by Blatter and his Brazilian predecessor João Havelange, during which Fifa’s revenues soared but scandals involving World Cup tickets, TV rights and corrupt bidding races multiplied. In May, Blatter was forced to promise to stand down and then was banned from football for six years for making a £1.3m “disloyal payment” to his one-time heir apparent Platini in 2011. Infantino said he would appoint a secretary general from outside Europe and said he still had “strong thoughts, dear thoughts for Mr Platini”.

Asked whether England would now vie for the World Cup finals again, he said the FA could bid for the 2030 tournament despite previous attempts descending into farce under the old Fifa regime. “This is a new day, a new dawn. I think we will certainly try and win some tournaments,” he said.

Gianni Infantino has been elected as Fifa president, winning a majority of votes on the second ballot beating Sheikh Salman al-Khalifa to the job

Infantino, a canny multilingual lawyer familiar to fans for his role conducting the Champions League draw, is likely to prove a more palatable frontman for Fifa’s desperate last-ditch reform attempts than Sheikh Salman. The Bahraini’s campaign was marred by persistent allegations that he helped to identify athletes punished following pro-democracy protests in 2011. He has denied the claims, admitting he chaired a committee convened for the purpose but insisting it met only once and conducted no formal business.

However, Fifa’s public image remains at rock bottom. Following various dire warnings from Fifa’s veteran acting president Issa Hayatou, himself once censured over his role in the ISL bribery affair, about the threat to the organisation if the “far-reaching and progressive” reform package did not pass, it was voted through by 89% of Fifa’s 207 members.

The reforms include term limits, transparency on pay, independent committee members and the replacement of the tarnished executive committee with a new, enlarged Fifa council that will set strategic direction but will not be responsible for commercial matters.

Critics will point to Infantino’s loyalty to the banned Platini and Uefa’s failure to embrace governance reforms as evidence that he does not represent the wholesale change required. “He knew nothing of the reason his old boss had been suspended. You can’t blame him for what Mr Platini might have been involved in,” Dyke said. “You’ve got to change the culture of Fifa so some of the antics of the last 20 years are over. This is a real chance.”