Alloway laid to rest..... As The Hitter was missing in action 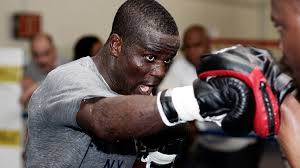 Former IBF welterweight champion Joshua Clottey aka The Hitter failed to turn up last night for his scheduled exhibition bouts during the wake-keeping of the late boxing trainer Godwin Kotey Dzanie, aka “Alloway.”

The boxers brought some form of entertainment to an otherwise melancholy event.

In another lightweight battle, Sheriif Quaye dazzled Michael Dodoo while Felix Ajom and Patrick Okine entertained the fans with a toe-to-toe-display.

Obodai Sai was given a stern test by Ishmael Tetteh in their middleweight showdown while Patrick Allotey and Robert Quaye exhibited some boxing artistries with the club loving every moment in their welterweight clash.

“We have lost a great person in the world of boxing,” said Zwennes. “He was one of the finest coaches Ghana has ever produced and about 45% of the current boxers have all passed through his hands.

“We will dearly miss him because he has done a lot for Ghana boxing in terms of producing talents. May his soul rest in peace.”

“It is very sad to lose such a person,” Azumah lamented. “He is like a brother and he is a real professional because I have worked with him before. He understood the meaning of boxing; I’m personally going to miss him dearly.”

Former GBA prez Captan said, “It is unbelievable we have lost somebody like Alloway. I’m short of words, I can’t fathom what to say. He has done a lot for Ghana boxing and we will surely miss him.

“I have lost a father,” said George Ashie. “He brought me in to boxing and now he has left me. Currently I’m totally confused because I have lost someone who was there for me whenever I needed him. He was my second father and I will never forget the good things he has done for me.”

Emmanuel Tagoe added: “It pains me that what coach Alloway predicted about my boxing future he is not going to be part of it. Coach Alloway told me that I will become a world champion if I should take my training serious and I’m on the right path of achieving that feat but he will not be a witness to it. It is very sad but I believe his soul is resting in God’s hands.”