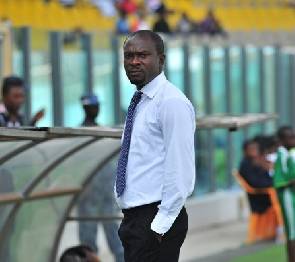 It was a difficult win against Bechem – Akunnor

Dreams FC Coach CK Akunnor has admitted their 1-0 home win against Bechem United in their first home game of the 2015/16 Ghana Premier League was a difficult game.

The Kweiman-based club recorded their second win in the ongoing campaign after they held on to Benash Quansah’s first half header.

Dreams FC who last week stunned Dwarfs by 1-0 in their Premier League debut in Cape Coast were given a good run for their money despite beating Bechem 1-0 at home. “It was a very difficult game. The goal that we scored was not from an open play. It was through a corner-kick.

“Bechem United played very well in the game and to get a goal under that situation it is always a good plus for me and I’m happy,” Akunnor said after the game.

Dreams FC will play as guests to Inter Allies in their next league game.

Pictures show some of the Technical Staff of Dreams FC expressing their joy over the victory.
Credit: Ghanasoccernet / Dreams FC