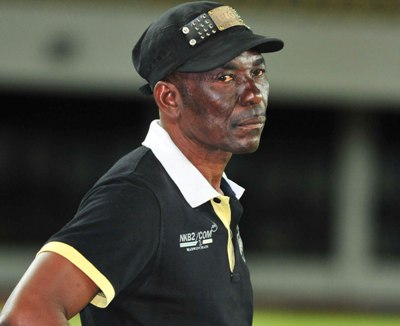 Mysterious Ebusua Dwarfs head coach, J.E. Sarpong, has ripped into his players for playing shambolic football in the sides first two games after returning to the Ghana premier league.

Dwarfs, one of Ghana’s oldest football clubs has failed to even gain a point after losing at home by a lone goal to fellow newly promoted side, Dreams FC and recently against New Edubiase at the Obuasi Len Clay stadium.
Coach Sarpong with his vast experience in the local game after stints with Accra Hearts of Oak and Great Olympics has been critical of his team after just two games into the season and believes the side can only survive in the top flight of Ghana football only if they begin to gain maximum points else he might have to consider his future.
He said, “after guiding the side into the premier league and with the goal king of the GN Bank 2014/15 season still in our fold, it is mind boggling to have scored no goal in two games and has not made an impact in any of our games.”
“Haven lost at home we were looking forward to make amends in the away game and yes it was difficult to play away from home but at least a point would have been good. You can’t tell if the players were ready to play or something is happening somewhere,” he added.