My late arrival is not an excuse - Yusif Abubakar 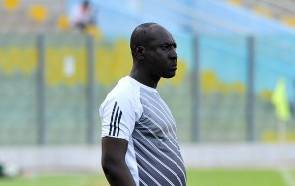 Techiman City FC coach, Yusif Abubakar took over the newly promoted Ghana Premier League side just 14 days to the start of the 2015/2016 season but has refused to attribute his side’s weekend defeat at Sekondi Hasaaca to inadequate preparation.
Yusif Abubakar, who has had stints with Hearts of Oak, Medeama SC and Berekum Chelsea parted ways with the Kpando-based outfit after failing to escape relegation in the 2014/2015 First Capital Plus Premier League. He was linked with Nigerian club Ifeanyi Ubah but ended up with Techiman City on a 2-year deal.
He led Techiman City to record a victory at home against his former club Berekum Chelsea on the opening day of the Ghana Premier League before losing 4-2 to Hasaacas at the Esipong Sports Stadium over the weekend.
Speaking to the media after the game, the experienced trainer said, “I wouldn’t use taking over the team last minute (before the season began) as an excuse for losing this match. Even after winning our first match, I still have a lot of things to do. This is a team that started actual preparations for the league on the 5th of this particular month (February) and we had only less than 2 weeks”.
“Also when you look at the setup, about 90%, this is their first premiership. Some of them have never even tasted premier (league) so I wouldn’t want to use the time factor as an excuse”, he added.
Coach Abubakar also stated that his side is a young team of inexperienced players but expresses confidence they will come good with time.
“All we want to say is that it is a young team of young players and if they are meeting players from Hasaacas, one of the old clubs in Ghana and have a lot of experienced players, we need to encourage the boys to go on and deliver in the next game” he said.