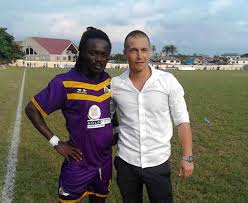 Medeama back Coach Tom Strand despite scrappy start in GPL

Medeama SC have thrown their support behind coach Tom Strand despite the team’s jerky start in the Ghana Premier League.

The Mauves who have been tipped as one of the favorite to clinch this season’s domestic top-flight are yet to secure a win after two games.

Coach Tom Strand and his charges suffered a 1-0 defeat away to Ashanti Gold before losing 0-2 at home to Hearts of Oak last Sunday.

The recent results has sparked rumours of a possible sacking of the coach who guided the Club to win the MTN FA Cup title last season as well as the Super Cup trophy.

The Club in a press statement released on Wednesday denied the assertion describing it fallacious.

“Medeama would like to deny widespread media reports that the future of coach Tom Strand has been discussed.

“The club wants to make it clear that Strand continues to have our full support,”

“As Tom Strand has said himself, results have not been good enough and the team’s performances must improve.

“However, we believe that we have the right coach to turn this season around and that he has the squad with which to do it.

“We are disappointed with our unflattering start to the Premier League but we remain resolute behind our coach and the players to turn things around.

“All the speculation being circled must be disregarded.”

The Swede is preparing the team for their upcoming League fixture against Asante Kotoko.