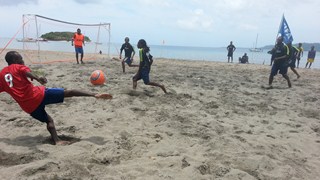 The founder and president of Ghana Beach Soccer Yaw Ampofo Ankra has optimistically expressed that western region can become the hub of producing beach soccer players and for that matter will go ahead to be the center of the now lesser known sport if proper structures are put in place with the necessary support from beach soccer enthusiasts.

Again he was very sure that beach soccer is going to give Ghana an identity aside football.
He made these comments in an interview with a local radio station, Kyzz FM. Yaw and his team started an outreach program some time ago in the oil city and has come back with his team to continue from where they ended. The core idea is to organize training programs for coaches, referees, players and managers who are fascinated about the emerging game and really want to be part of it success story

Young Bridge Foundation (YBF) is pioneering this heartwarming idea. According to Yaw Ampofo Ankrah, the goal of YBF is to promote an environment that optimizes the potentials of the Youth and to support them develop into responsible adults. So beach soccer is only a subsidiary of the bigger vision which includes coastal community’s sanitation, education and youth development.
The team from Accra will collaborate with the existing local beach soccer experts to get them abreast with the new ideas about the not so popular game in Ghana. The team will go to the Ahobre, Ellembelle and Ahanta district to organize the program.