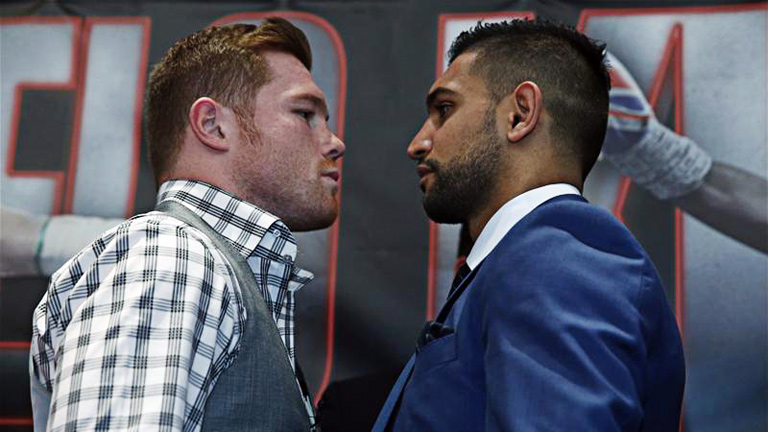 THEY call him “Canelo”, the Spanish word for cinnamon. Mexico’s flame-haired Saul Alvarez may look different to many of his countrymen but, sitting at a table at in a sideroom at the Park Plaza hotel in London, he appears the very picture of a world champion. You can make out the line of an old scar above his right eye. Broad shoulders sprout out from beneath his waistcoat. He rests his thick fists on the table top, a heavy gold watch shining on his wrist. All hints at his now exalted status, and the long struggle that’s brought him to the top of the sport.

Alvarez is still only 25 years but began his professional boxing career a decade ago, when he was a child effectively. A baptism of fire that forged him into the fighter he is today. “I didn’t have too many amateur fights, I debuted as a professional at 15 years old. So I think that it’s prepared me very, very well. I’ve had many tests from my career. But thank God I’ve passed all my tests and that’s what’s gotten me to where I’m at now,” Alvarez said softly. “I’ve done a lot and I’ve accomplished a lot in my young career, the years that I have. There’s so much more I have to accomplish.”

Canelo served a harsh apprenticeship but as he worked his way up the ranks he was well matched by Golden Boy promotions, culminating in winning his world strap, at an 155lbs catchweight, from Miguel Cotto last year. His only loss came against the excellent Floyd Mayweather in 2013. “I learned so much from that fight, from the Cotto fight. I learned a lot when you fight a fighter like that, a veteran like that, with the experience that he has, you learn a few things. I was able to utilise some of the experience that I had to be able to beat him. So you learn so much and you take that with you. It was a big honour for to fight against him and I took so much out of it,” Alvarez said. “[From Mayweather] I learned so many different things there’s not one thing I can specify that I learned. I can’t pinpoint just one thing, there are so many things I learned. But for me I took out of that fight, just fighting a fighter that has that style and I’ve been able to incorporate it in my style now.

His next task is to defend the WBC middleweight title against Amir Khan on May 7 at the new T Mobile arena in Las Vegas. Khan went a different route to reach this point, but not necessarily a less arduous one. He was a boy fighting, and beating, men when, at just 17 years old, he won a silver medal at the 2004 Olympic Games. Amir has met defeat more often as a professional, losing to Breidis Prescott, Lamont Peterson and Danny Garcia but Canelo made his admiration for the Briton clear.

“I’ve been watching Khan. I was fortunate enough to be present at the Chino Maidana fight and I was very impressed. He’s a fighter that is a very good boxer. He’s got very good speed, good boxing but at the same time he’s aggressive, he likes to fight. Which is something that I like and it’s good for me. I have to be prepared 100 percent. I’m not taking this fight lightly. I have to prepare for it 100 percent and I will be,” Alvarez said.