From Stephen Appiah to President of Turkey 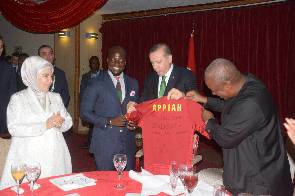 Former Ghana and former Fenerbahce midfielder Stephen Appiah was given a presidential treat after he presented a jersey to Turkish President Tayyip Ergogan who is in Ghana.
Appiah who is now the vice president of the Professional footballers association of Ghana was at the Banquet hall at the request of President Tayyip Ergogan who is on a two day visit to Ghana.
The iconic former Ghana international spent three glorious years [2005-2008] in the Turkish league with Fenerbachce where he established himself as one of the best players in the league at the time.
Appiah’s exploits on the pitch with Fenerbahce which is one of the big clubs in Turkey seem to have cemented in the memory of President Tayyip Ergogan who ensured he caught up with one of his all time favourite foreign import to have grassed the Turkish league.
Blessed with an incredible personality and exemplary leadership Stephen Appiah is credited with uniting a heavily talented yet disunited Black Stars team to qualify for Ghana’s first ever world cup in Germany 2006.
Despite hanging up his boots he is still regarded as one of the powerful voice in Ghanaian football.