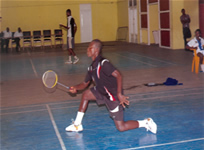 The Secretary General of the Ghana Olympic Committee, Mr. Richard Akpokavie, has congratulated the national badminton team for their exploits at the Rio 2016 Olympics qualifier in Mauritius.

The team won four medals in the Rio Individual Championships and two more medals in the female and male team events in the Thomas and Ubeh Cup held at the Rose HillSports Hall in Mauritius last week.
The GOC partly funded the trip by providing air tickets for three members of the team to aid their qualification for the 2016 Rio Olympic Games.
In sponsoring the national team for the qualifiers, the GOC was going beyond its core mandate of leading Team Ghana to the Olympic Games after National Sports Federations and the National Sports Authority also supported the national teams to qualify for the Games.
During a courtesy call on the GOC, the Secretary General, Mr. Akpokavie particularly commended the team for winning their first medals in the Thomas and Ubeh Cup, noting that this was the first time the team had won medals at the famed competition.

Akpokavie, who also serves as the President of the Ghana Hockey Association, reiterated the GOC’s commitment to assisting national teams and individuals with the best prospects to qualify for the Rio 2016 Olympics.
He also charged the team to aspire to qualify for the Olympic Games, having successfully debuted in the 2014 Commonwealth Games earlier.
Some of the badminton team members who were present at the ceremony included Daniel Sam, Abraham Ayittey, Michael Opoku Bah, Stella Amasah, Gifty Mensah, Stella Amasah, Emmanuel Donkor and team coach, Attamah.
It will be recalled that Emmanuel Donkor and Gifty Mensah won silver medals for Ghana in the mixed doubles final event at the Rose Hills Championships. Michael Opoku Baah and Abraham Ayittey won bronze in the Men’s double while Gifty Mensah and Stella Amassah picked another bronze in the women’s double game.
The pair of Daniel Sam and Stella Amasah won another bronze in another mixed doubles match up.