GPL Gate Proceeds - After Week One 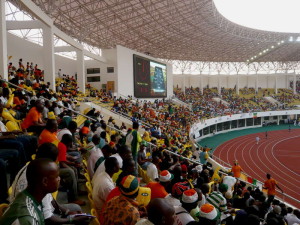 Transparency is a needed tool in all agencies of endeavor, Ghana Premier League 2015/16 according to many Sports journalist in the country the new season has shown glimpses of a positive impact on the national League. At the business aspect of the game, the main source of income for Ghanaian clubs is gate proceeds, teams rely on gate proceeds to run their clubs, player wages and monthly salaries are all paid with the turnout at every club.

Week one of the Ghana Premier League saw clubs that played host making huge sums from the spectator turnout, notably new comers Techiman City and former Confederation of Africa Football champions League winners Accra Hearts Of Oak were the massive beneficiaries, the duo purportedly made 5,700.00 and 4,700.00 cedis respectively. Week two of Ghana premier league had some interesting fixtures, Hasaacas hosted league debutante Techiman City in a six goals thriller, with ex Asante Kotoko striker and 2007/8 Ghana Premier League goal king Eric Kwabena Bekoe scoring two of the four goals scored by the home side, even though the visitors lost but were much impressive and sold a good game to the estimated 3,500 spectators available.

The business side of the tie was something less to be desired of compared to the week one amounts made by certain clubs. After all deductions report suggest the Sekondi based team and bank roller of the club Nana Banyin Eyison made an amount just above 5,213.00 cedis.

Many thought with the state of the club they should have gotten better in that stead but nobody can fault the team that has conceded much goals in the league season(5) and many also attributed the resulted income to the kind of opposition they played against. It was “make it rain” at the Tarkwa and Aboso Park, home side Medeama SC won not on the pitch but on the business side of it, arguably the most supported club in Ghana, Phobia came to town and Moses Armah Parker owner of the CAF Confederations Cup representatives gifted two second half goals but can take consolation from the estimated 8,000 spectators that graced the T and A Park.

After all deductions the club nicknamed “Brothers” had a sum of 60,800.00 cedis which many aggrieved journalists on the day called for the Tarkwa based club to at least be able to provide a media tribune, Substitute bench and a shelve for the match officials in case there is a rainfall on the match day. The Tarkwa based club have no points in their two honored games and will travel to Baba Yara stadium on match day 3 to play former champions Kumasi Asante Kotoko.