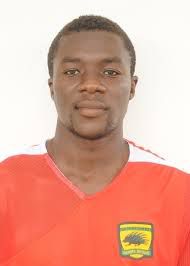 The 28 year-old forward’s career has seemingly taken a nose dive since leaving the Kumasi based club three seasons ago to join Libyan giants Al Ahli.

Nti Boakye failed to perform at the Tripoli based club and his contract got terminated in just two months into his three-year deal.

The Ghanaian last year had trials with South African premier league side Ajax Cape Town but talks with Roger De Sa’s side fell through.

And in his quest of salvaging his footballing career, the former Heart of Lions hit-man has signed for Nigerian side Ifeanyi Ubah and last Sunday he made his Premier League debut for his new found club in their 2-0 away loss to Rivers United.