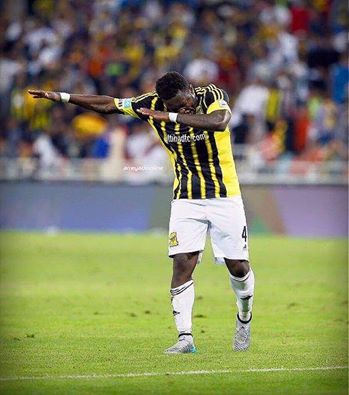 Ghana international Sulley Muntari scored an amazing long-range goal to earn a point for Saudi side Al Ittihad in their clash against Uzbekistan club Lokomotiv Tashkent in the Asian Champions League on Tuesday evening.
The 31-year-old raced the Yellows into the lead at the King Abdullah Sports City with a trademark drive from the edge of the box in the 14th minute effort.
Romanian midfielder Lucian Sanmarten weighted in a corner kick from the right, causing the Tashkent defence to clear.
But the clearance was unclear and fell to Muntari who applied a stunning drive to beat the Tashkent goalkeeper for the opening goal.
However Muntari’s goal could not stand as the visitors equalised ten minutes from full time.

The former AC Milan and Inter Milan midfielder, who is on international suspension, has now scored three goals for Ittihad this season.
Ittihad are third on the G roup A table after drawing both of their opening games in the group.