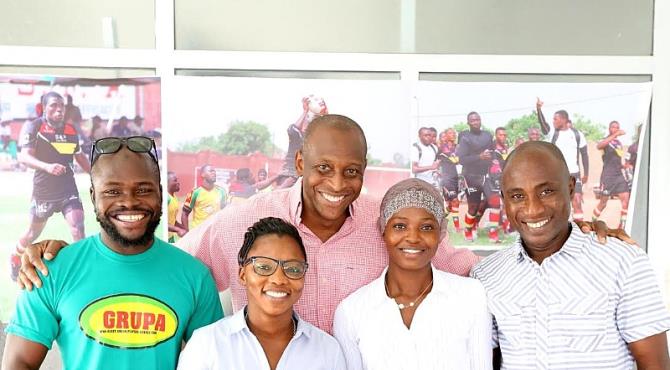 Mr. Herbert Mensah, President of the Ghana Rugby Football Union, who donated the kit and equipment to women’s rugby with (from left to right) Sani Alhassan (caretaker coach for the women’s rugby team), Kukua Aggrey (captain of the women’s rugby team), Raf
International Women’s Day (March 8) is a global day celebrating the social, economic, cultural and political achievements of women. The day also marks a call to action for accelerating gender parity.
Worldwide, women continue to contribute to social, economic, cultural and political achievement. According to the official International Women’s Day website progress towards gender parity has slowed in many places.

The World Economic Forum predicted in 2014 that it would take until 2095 to achieve global gender parity. Then one year later in 2015, they estimated that a slowdown in the already glacial pace of progress meant the gender gap wouldn’t close entirely until 2133.
According to World Rugby women’s rugby is one of the fastest growing team sports in the world, played by more than 1.5 million girls and women in over 110 countries – more than 20 per cent of the total playing population.
With World Rugby’s vision being ‘A Sport for All, True to its Values’ and its mission to ‘Grow the Global Rugby Family’, World Rugby says that it is important to recognise that women and girls form an integral part of that vision and mission.
A five-year Women’s Rugby Plan was launched in 2011 and since then the women’s game has enjoyed unprecedented growth, helped by Rugby Sevens’ inclusion in the Olympic Games which is taking the game to established and new markets in the build up to Rio 2016.

According to the President of the GRFU, Mr. Herbert Mensah, women’s rugby has been left behind and in the dark for most of the 12 years of the existence of the GRFU.
“Although there were sporadic attempts at establishing women’s rugby in Ghana, none of those attempts resulted in the establishment of sustainable structures and continuity. Despite so many other priorities my administration has placed women’s rugby at the very top of the development agenda,” Mr. Mensah said.
He continued to say that the commitment to build women’s rugby in Ghana is already reflecting in the “Get Into Rugby” (GIR) programme where 5,415 girls took part in GIR related events compared to 1,900 boys since the beginning of the year.
The activities planned to celebrate International Women’s Day include women’s sevens matches in both Accra and Cape Coast at the Accra Sports Stadium and Robert Mensah Stadium respectively on 12 March 2916.
In Accra six teams will compete for a Women’s Day Cup while four teams will do the same in Cape Coast with junior teams playing curtain raiser matches.
The two women who are spearheading the revival of women’s rugby in Ghana, Kukua Aggrey (captain of the women’s rugby team) and her assistant Rafatu.
A group of women under guidance of coach Sani Alhassan has been preparing for bigger things to come in Ghana Women’s Rugby.
Credit:Modernghana.com