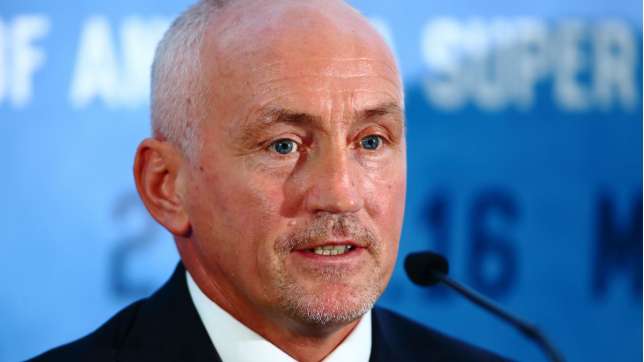 AIBA president Wu Ching-kuo’s desire to have professional stars in the Olympic boxing tournament is ‘bonkers’ according to Barry McGuigan.

Former world featherweight champion Barry McGuigan has lambasted the prospect of professional boxers competing at the Olympic Games as “bonkers”.

On Wednesday, International Boxing Association (AIBA) president Dr Wu Ching-kuo announced he wishes to abolish rules preventing boxers with 15 or more paid bouts to their name from competing at the Olympics – traditionally the pinnacle of the amateur sport.

Remarkably, Wu wishes to force through the controversial reform in the hope of attracting boxing’s biggest stars to Rio 2016.

McGuigan, who represented Ireland at the Moscow 1980 Olympics before becoming a ring icon on his memorable ascent to the WBA featherweight crown, feels the proposals are unworkable and risk bringing further confusion to boxing’s often muddied landscape.

“I think it’s an absolutely bizarre idea. I don’t know whether it’s a publicity stunt,” he said.

“They obviously want to appeal to the superstars of the sport but, come on – would Amir Khan go back to the Olympics Games?

“Would Canelo [Saul Alvarez] come down from 12 rounds, when he started pro-boxing at 16 and spent all of his time learning to fight 12 rounds?

“You’re at a distinct disadvantage to the kids who are training specifically for three rounds – you could get beaten by one of these guys and get the humiliation of that. Plus, there’s no money

“[Amateur boxing] is a completely different sport – what are they playing at? It’s confusing enough with the [professional sanctioning bodies] WBO, WBA, WBC and IBF.

“I think it will confuse the general punter more than anything else. We don’t need any more confusions.

“I went to Moscow and captained the Irish Olympic team in Moscow, so I’ve lived that. But if someone had said right in the middle of my reign as world champion, ‘will you go back and be an amateur’, I would have thought they were off their head.”

McGuigan is the manager of undefeated IBF super-bantamweight champions Carl Frampton, who takes on arch-rival and WBA ruler Scott Quigg in a unification showdown on Saturday in Manchester.

The 54-year-old was dismayed to see Wu make his announcement in the English city and accused the AIBA chief of attempting to garner publicity on the back of Frampton v Quigg.

McGuigan said: “Wu was here yesterday in the foray of the hotel and then I thought ‘what’s he doing here?’

“Then I hear this news and it just seems a bit desperate. How would any of the pros get ready for the Olympics in July and August? It’s just bonkers.”