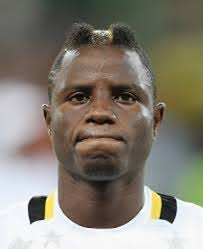 Ghana have been dealt a hammer blow ahead of the 2017 Africa Cup of Nations qualifier against Mozambique with news impressive midfielder Mubarak Wakaso will miss the double-header due to injury.

Wakaso, who plays for Spanish side Las Palmas, has been ruled out of action for at least a month.
The 25-year-old up a muscle injury in his right thigh during his side’s win over Getafe on Tuesday night and will be in the treatment for the next four weeks.
“The UD Las Palmas medical services have confirmed Wakaso muscle injury. The player, who suffered an injury in the right biceps will be out for at least one month” a statement on the club’s official website read.
Ghana will host Mozambique on the weekend of 23-25 March with the return encounter fixed for a week later.
This means the Ghana international will not recover in time for the crucial duels against the Southern African nation.
The absence of the midfielder is a massive blow for coach Avram Grant, who is a key admirer of the Rubin Kazan man.
Wakaso has emerged as perhaps the most impressive Black Stars player in recent times, churning out fabulous performances on international duty.