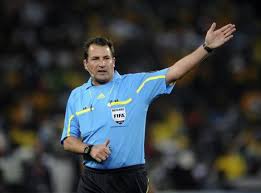 Moroccan referee Bouchaib El Ahrach has been appointed by CAF to handle Ghana’s 2017 Africa Cup of Nations home qualifier against Mozambique this month, CAF has revealed.
The 44-year-old, who is hugely experienced, will take charge of the match scheduled for the Accra Sports Stadium.
He will be assisted on the lines by fellow countrymen Redouane Achik and Mouhib Abdallah Filali.
The match will be played in Accra on 24 March.
The kick-off time is 15:30 local time.
The centre referee will be in familiar territory as he was the man in charge of the game when the Black Stars defeated Egypt 6-1 in 2013 in Kumasi to reach the 2014 World Cup in Brazil.
Ahrach has previously handled high profile matches including the game between the Ivory Coast and Senegal in the final round of the 2013 Orange Africa Cup of Nations qualifier.
He was the centre referee of which ended in chaos.
El Ahrach awarded a late penalty to Ivory Coast and recklessly showed Senegal defender Jacques Fathy the red card.
Ahrach also refereed the CAF Champions League final in 2012 which Ahly won 2-1.