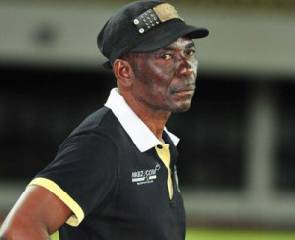 Mysterious Ebusua Dwarfs coach, J. E Sarpong has accused the media of misquoting him in relation to a statement he made after his side lost to New Edubiase in match week 2 of the 2015/16 Ghana premier league season.
The former Accra Hearts of Oak manager was reported to have the feeling of saboteurs within his squad who have a sole aim of disgracing him and he won’t let that materialise.
But the hard-talking former physical education training instructor at Accra Academy senior high school has rubbish and denied those claims.
Speaking in the post-match presser after Dwarfs 0-0 result against Hearts of Oak in match week 3 at the Robert Mensah stadium, coach Sarpong nicknamed ‘Shapiro’ said, “people took my statement out of context as what I meant to say the players are not committed and not that there is crisis in our camp.”
“I added that if they continue with this attitude then I would advise my self unlike Jose Mourinho who refused to do so and had to pay the price (get sacked). I never said I’ll quit the club as was published on Ghana web and will ask if they are here should call me and verify or seek clarification before publishing,” he added.