League hots up in Week 3 with surprise for Hasmal 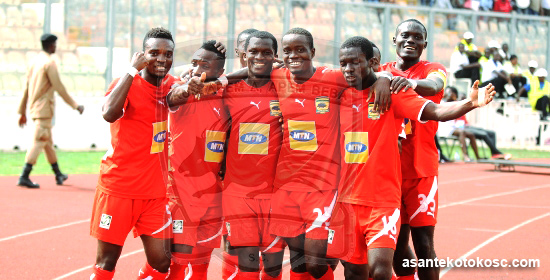 Ghana’s two biggest clubs were held to separate draws on matchday three of the local topflight
Wafa were the biggest winners on matchday three of the 2015-16 Ghana Premier League, while Hearts of Oak and Asante Kotoko were each forced to settle for a point in separate games on Sunday.
Coach Kenichi Yatsuhashi’s Hearts side failed to pick maximum points for the first time this season, having been held to a scoreless stalemate by Ebusua Dwarfs at the Cape Coast Robert Mensah Stadium. The home side, on the other hand, picked their first point of the campaign.
At the Baba Yara Sports Stadium in Kumasi, Asante Kotoko recorded their first point of the season in a 2-2 stalemate with reigning FA Cup champions Medeama. Bennett Ofori and Michael Yeboah scored for the Porcupine Warriors, but Malik Akowuah and Bismarck Oppong also found the back of the net for the Yellow and Mauves, ensuring the two sides shared the spoils.
Sekondi Hasaacas were at the mercy of Wafa at the Sogakope Stadium when the academy boys scored five unanswered goals at home. Black Stars winger Samuel Tetteh notched a hat-trick while Charles Boateng and Gideon Waja scored the other two.

Wa All Stars were held to a scoreless draw at home by Liberty Professionals, the former having won their two previous games of the season.

Dreams FC also failed to get their third win of the campaign, although Lawson Bekui scored twice in their away clash with Inter Allies at the Tema Sports Stadium. Evans Mensah and Prince Baffoe both found the back of the net for the Eleven-Is-To-One, ending the match in a 2-2 draw. Wahab Ackwei missed a penalty kick for the home side in a game that had Black Stars coach Avram Grant in attendance.

Aminu Mohammed was the hero of the day as his solitary strike proved the difference in Bechem United’s 1-0 home win over New Edubiase at the Nana Gyeabour Park.

At the Nana Ameyaw Park, Stephen Manu made amends for a missed spot kick with a goal that handed newly-promoted Techiman City a 1-0 victory over Aduana Stars. The latter have lost all three games of the season so far.

And earlier on Saturday, reigning champions Ashanti gold were held to a 0-0 draw by Berekum Chelsea at the Obuasi Len Clay Stadium.