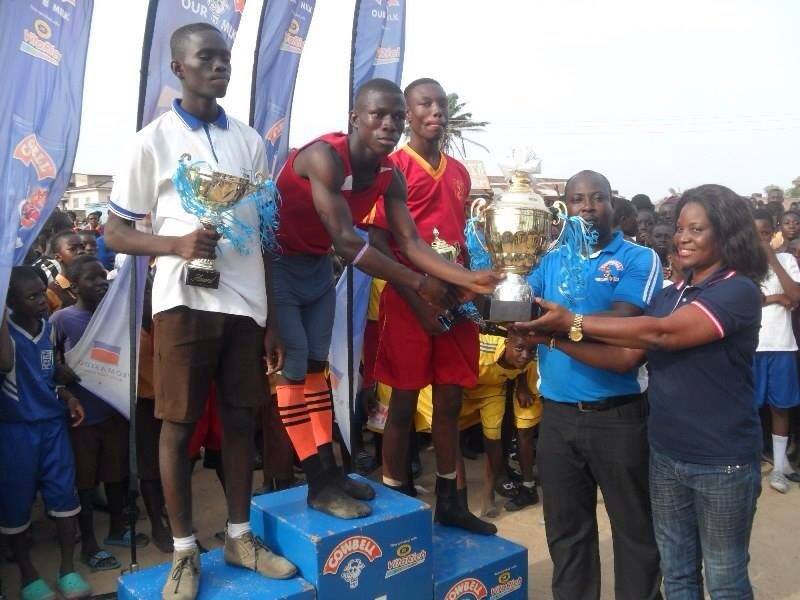 LEKMA 2 were declared overall champions at the two day athletics sports event held at the Ledzokuku North cluster of schools on Wednesday and Thursday March 9 and 10.

The programme which was sponsored by Cowbell saw the students exhibiting their skills in running and jumping to the delight of fellow students, teachers and the public.

LEKMA 2 got 130 points to win the junior secondary schools category and 50 points in the primary category to place second.

There was jubilation all over at the end of the festival which was sponsor by Cowbell for the first time and it was a big success with the pupils and students shouting Cowbell in the songs that they sang.

The teachers joined in the merry making to the admiration of Cowbell officials, after trophies were presented to the winners. almost all the schools had something to cheer about and it was amazing to see the young lads in jama sessions as Teshie is noted for kpashiemo, stamping of feet during the Homowo festival

Mesharch Kanno who won the boys 800m, 1,500m and 5,000m sad he was happy to show is talent and hope to run better and perform for Ghana one day.

Aaron Tei , winner in the 100m, 200m, and 400m as well as the relays thanked Cowbell for the support and wished they come again.

Emmanuel Bortey who was the star of  LEKMA 2 JHS collected the winners trophy from Mrs Ivy Agyei -Twum , the Circuit Supervisor and promised to train harder to retain the cup.

Female runner Elizabeth Nakoro, form one student of LEKMA 11 who was first in the 3,000m, second in 800m and third in 1,500m said she hopes do better next time and was happy to represent the school.

Joseph Ashong , Brands Manager of Cowbell said he was impressed with the massive turn out at the event and loved the competitive spirit shown by the students as both winners and losers were jubilating after the events.