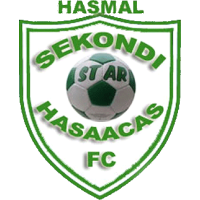 Premier League side Sekondi Hasaacas have debunked reports that they manhandled a Supersport cameraman during their week four league fixture with AshGold at the Essipong Sports Stadium in Takoradi on Sunday.

Reports were that the cameraman of the broadcast sponsors of the Ghana Premier League was denied access to cover the game and was manhandled by machomen of the home side.

But the Sekondi-based club has denied the allegation in a press release saying even though they denied the cameraman access to take a video of the match because they were not informed, neither did the cameraman show up at the pre-match discussion, they they never assaulted him physically.

Below is the Pree Release signed by the Public Relations Officer of the club:

The attention of the management of SekondiHasaacas F/C has been drawn to false news circulating in the media that a Supersport TV cameraman was manhandled and had his equipment destroyed by amachoman hired by SekondiHasaacasF/C officials during their league match against Ashantigold at the Sekondi Sports Stadium last Sunday.

We wish to state that the storyis contemptuous, unprofessionaland totally false; and meant to drag the name of a media friendly club like SekondiHasaacasF/C into disrepute. The media has been very supportive in the coverage and promotion of our games and we would not adopt any antagonistic tactics to stifle the work of our great partners. As a law abiding club, we complied with aGFA/PLB directive and allowed Supersport to cover our league game againstTechiman City FC about a fortnight ago at the Sekondi Sports Stadium.

Indeed, the Ashgold TV team told our Deputy Chief Executive, Mr. OforiAcquah,when they arrived at the stadium yesterday that they were there to cover the game and use the excerpts for Ashgold TV on DSTV but he did not accede to their request. They violated the rules and sought permission from the match commissioner, Mr. Arthur Dadzie, but he and other stakeholders agreed that Ashgold TV could not cover the match since they did not make that request at the pre-match meeting. This was communicated to them and they returned with a Go TV camera to cover the game in defiance of the rejection of their earlier request for the coverage of the game.

The norm is that any club that wishes to cover a match will first have to apply to the GFA for permission and when granted, a fee is paid. A receipt is then shown at a pre-match technical meeting for all stakeholders to be aware of before coverage is sanctioned.  Apart from the GFA/PLB cameramen who have the authority to cover all the eight games on match days, no TV station or a cameraman has any mandate to cover even one game without going through the due process. Truly, since there was no indication from GFA/PLB for any TV station to coverthe game, we had every right to stop any non-accredited cameraman who came to the stadium for the coverage of the match.

We wish to state that all matches that are to be covered by Supersport are sent to all the clubs and yesterday’s was no exception. Supersport had no business with our match in terms of coverage, whether live or delayed.

The gentleman who led the Ashgold TV team, Collins, was duly informed by the match commissioner and the PLB Vice Chairman, Mr. George Amoako, not to cover the match but they went ahead and now want to put a spin on the incident that happened as a deliberate attempt to stop the Go Tv cameraman from covering the match.

We wish to state emphatically that no top official of the club engaged the services of any machoman to manhandle any Supersport personnel or destroy any camera. Indeed, no equipment was damaged and Messrs Kofi Poku and George Amoako who were at the stadium,would testify to it.

The irony is that Superport has the TV rights and we need to be professional and protect their interest if any camera, branded and or from a non-accredited TV station decides to cover a match for which only Supersport has the rights to, but has decided to do it elsewhere for that particular weekend.

All the stakeholders-premier league teams, match officials, football fans and the media including Supersport would attest that the Sekondi Sports Stadium is one of the safest league centres in the country and we would enviously do everything possible to maintain this status. We wish to advise the originator of the story to give us a fair reportage and not fabricate stories that would rather damage the image of our great club and even that of the 2015/16 Ghana Premier League that is just four weeks old.