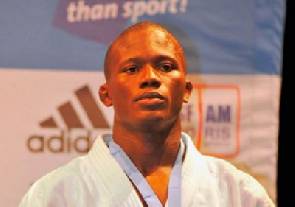 Ghanaian judoka, Emmanuel Nartey, resisted a fierce challenge last Saturday to upstage his Spanish counterpart, Javier Ramirez, to win a gold medal in the Under- 73 kilogramme category at the African Open Championship in Casablanca, Morocco.

The 32-year-old officer of the British Army, emerged victorious in all his five previous fights on his way to defeating much-fancied Ramirez in the final.

He was the only gold medalist from Africa in a tough field where many athletes needed points for Olympic qualification.

Nartey is ranked an unimpressive 52nd in the Under-73 kilogramme category but that may be enough to qualify via the continental quota system.

After his victory, Nartey is expected to rise up the world rankings and his good form will come as a boost as he prepares to capture more points at the African Championships slated for April 7 in Tunis.

Nartey was embroiled in controversy in 2014 when Ghanaian officials ejected him from the 2014 Commonwealth Games Village in Glasgow for gross indiscipline after he was accused of accosting Ghana’s Deputy Minister of Youth and Sports, Vincent Oppong Asamoah, over re-reimbursements for expenses he had incurred”.

He won the SWAG Judo Star of the Year (Male) in 2015 for wining a bronze medal in the 60kg division at the All Africa Games.