Regional Millennium Marathons 2016 to come on 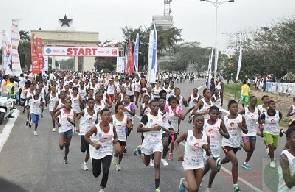 News on Regional Marathons ahead of main event

Runners of the marathon

The 2nd edition of the highly acclaimed international millennium marathon will commence its preparatory regional marathons in the Northern regional capital, Tamale.
Ten (10) regional races will take place in all regional capitals of Ghana in anticipation of the main international marathon on September 3. The regional marathons this year will be launched by the Minister of Youth and Sports, Nii Lantey Vanderpuye in Tamale.
The theme for this year’s marathon is “Africa on the run for peace and health” and will commence later in March in the northern region. It will continue later in the Upper West and East regions before moving to the Brong Ahafo, Eastern and Western regions.
The Ashanti region will then have its turn before that of the Central and Volta regions with that of the Greater Accra region expected to be held on 11 June.
The climax of the marathon season will be held in Accra which will see well- acclaimed international runners from all over the world, elite Ghanaian athletes, corporate bodies, keep fit clubs, social runners, students and members of the diplomatic corps participating.